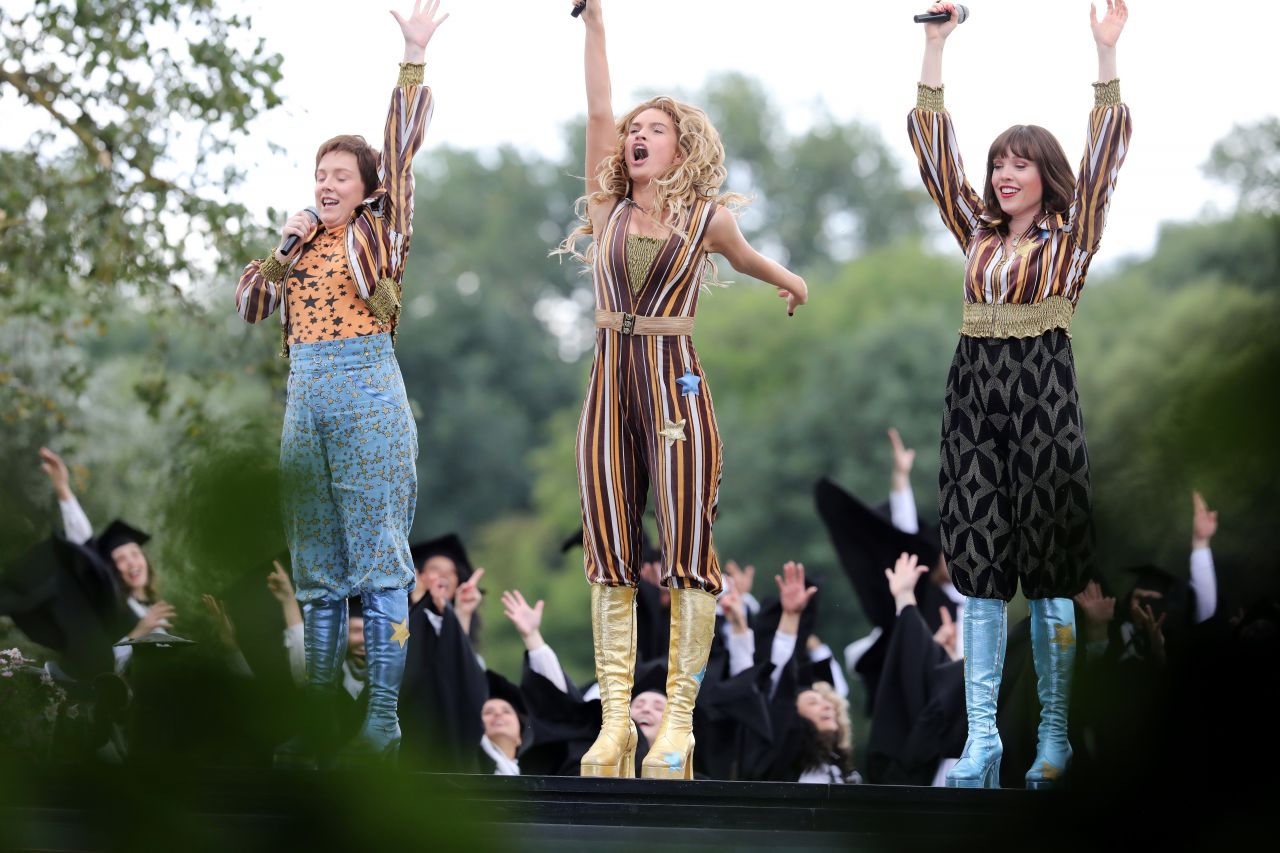 Young Donna incites crowd to rebellion: We will overthrow the monarchy and install a metallic boot wearing Marxist collective!

Synopsis: In the sequel to Mamma Mia! a woman’s adventurous youth is recounted while her grown daughter gathers family & friends for the grand re-opening of the Greek resort founded by her mom. All to the tunes of ABBA.

Mamma Mia! Here We Go Again aka Mamma Mia 2 continues the story  of Donna (Meryl Streep) and her grown daughter Sophie (Amanda Seyfried). The film begins with Sophie laboring to get their Greek resort ready for a grand re-opening. The movie cuts back and forth between present day and 1979 when we see a young Donna (Lily James, spectacular as usual) embark on her European idyll and her couplings with a young Harry (Hugh Skinner), young Sam (Jeremy Irvine) and young Bill (Josh Dylan).

Everyone keeps saying that you just have to take Mamma Mia 2 at face value — a couple of hours of fun fluff chockfull of ABBA music. I don’t know what movie they were watching because the movie deals with all sorts of heavy issues like death (possibly murder — more on that later), the mysteries of genetics and aging (no one looks related who is supposed to be or even remotely like their younger selves) and Greece’s crumbling economy.

SPOILER ALERT: Donna died! This is revealed maybe fifteen minutes into the movie, so no big secret. But it’s never revealed how Donna met her end! Did she miss a hairpin turn in her Jeep? Did she have a fatal remodeling mishap?

Sophie, as you can imagine, is feeling really sad that her mom has passed on. Sam looks sad too. Pierce Brosnan, alone in his study, gazes at old photos of Donna to the strains of ‘SOS.’  (Remember in ‘Mamma Mia’ when Pierce was belting out ‘SOS’? No audience chuckling this time, here he is directed to talk-sing at a low volume.)

As he looked at Young Donna pix, a weary unreadable expression on his face, I began to wonder… did Sam kill Donna? Maybe he was not okay with being one-third of Sophie’s dad. After all, he is her stepdad and lives at the resort with her. And maybe it gnawed at him, jealous of Donna’s other lovers. Was he just another romantic conquest?

Of course I didn’t want to consider that Sam/Pierce was a murderer and perhaps he was overdue for some fun, but later in the movie, he is dancing and preening and smiling like no self-respecting grieving widower you’ve ever seen!

Anyway, the movie zips back to 1979 when Young Donna makes her way from her recent UK graduation to Paris, in search of adventure. There she meets  Young Harry who serenades her with ‘Waterloo.’ Young Donna relieves him of his V card back at her room. you can tell from his clueless satisfaction and her embarrassed countenance that he was a lame lover. Young Donna seems to suspect that he is gay before Young Harry has a clue.

When next we see Donna she is flitting  her way around a Greek isle in a state of ecstatic wonder — she looks high as f*&%. Presently the skies open up, rife with thunder. Like in a fever dream, Young Donna stumbles into a cavernous, ramshackle barn where a magnificent stallion rears up against his ties. She makes to soothe him, and in the grips of her Freudian trance, rushes off into the storm in search of aid. Methinks the lady’s hormones have hijacked her brain. Anyway, as if conjured by her own lust, Young Sam appears, careering along on a motorbike. At first I wondered how the heck he could help because the last thing a spooked horse needs is someone zooming up on a motorcycle. But then I saw that this swain was actor Jeremy Irvine who played the best friend of his confidante Joey, the brave and loyal equine in War Horse. All will be well.

Before you can say ‘whoa,’ Young Donna and Young Sam are at Sam’s shack, lolling around in a state of extra connubial bliss. Viewers of Mamma Mia will recall that Young Sam had a fiancée and that Donna kicked him to the curb when she found out. Not to worry, she wouldn’t be alone for long. Donna’s singing friends, Young Tanya and Young Rosie join heartbroken Donna for some supportive singing gigs at the local taverna. You will be able to keep them straight because they have the exact hairstyles that we are familiar with from forty years later. Of course Young Donna ditches them when Young Bill, whom she had previously hitched a boat ride to the island from, returns from a sailing race. You can’t really blame her because he is D-R-E-A-M-Y. Donna dives right into his tantalizing hotness and voila, possible impregnator #3.

Meanwhile, back in present day… a storm rips through the Greek isle, rubbishing the resort’s outdoor party space and impeding guests from reaching the island. Bad news for Sophie, but worse news for her employees. Having managed to secure a few euros worth of work in a ravaged economy, their livelihoods are precariously tied to the viability of the resort. Already they’ve been compromised: the rank and file have to pander to Greek stereotypes and endure sexual harassment. Rosie and Tanya lasciviously eye their masseurs and the Latin hotel manager, Senor Cienfuegos (Andy Garcia), seems pressured to faux romance the clientele of a certain age. Tanya brazenly demands he be  ‘washed and brought to my tent.’

And poor Greece itself, can’t catch a  break — the Greek scenes were filmed in Croatia. The producers did however find room for a few actors of Greek heritage in small parts. Judging by the English surnames of the ensemble members, many of the dance sequences were filmed in the UK. Reportedly, Greek officials didn’t court filmmakers; too bad since youth unemployment hovers at forty percent. Maybe Nia Vardalos, who managed to film My Life In Ruins in Greece, could have brokered a deal.

In any event, Sophie has a hotel to open and there are plenty of occasions for much singing of and dancing to ABBA songs. The band’s second tier material is ‘meh’ but we fortunately get repeats of our fave songs from the last movie, like a rousing ‘Dancing Queen’  that includes dancing on shore and at sea. Extra points for Sam & Harry’s reenactment of Jack & Roses’s prow of the Titanic embrace. I couldn’t help but notice that possible Donna killer, Sam looked fabulously untroubled as he danced and lip synched.

If you think the delirium must ebb at some point, you are wrong. Because Cher, as Donna’s mom, arrives in a helicopter. She emerges looking like she has just stepped off a

Vegas stage, immaculate in white and metallic, crowned with a  spectacular white wig thick as ermine, holding court with a flashy pimpesque cane in hand. Perfectly Cher. Time has not passed for Cher like it has for the rest of humanity; her preternaturally tight yet puffy face suggests mush of her time is spent in the LA chambers of various youth and beauty vendors well-stocked with injectables and sutures.

So there you have it — an Oscar bait film that grapples with the unending push and pull of Life and Death on a little Greek- uh, Croatian island.

PS You just might see a ghost Meryl Streep/Donna

Cut to the Chase:  A foolish, fun diversion